The October 2020 issue of Foreign Policy Analysis (Oxford University Press) includes the article “Patterns of Political Ideology and Security Policy” by Tim Haesebrouck and me. In the article, we examine the relationship between the ideology of political parties and their general support for military missions.

Empirically, the study confirms a curvilinear relationship: with support peaking among center-right parties and dropping the further one moves to the far-left and far-right. However, when looking at actual military participation the pattern is different. Here, left-of-center parties have deployed to military missions more often than their rightist counterparts.

Founded in 2005, Foreign Policy Analysis (FPA) aims to serve “as a source for efforts at theoretical and methodological integration and deepening the conceptual debates throughout this rich and complex research tradition”. The journal is published by Oxford University Press under the auspices of the International Studies Association (ISA).

Abstract: Recent studies on political ideology suggest the existence of partisan divides on matters of foreign and security policy – challenging the notion that “politics stops at the water’s edge”. However, when taken as a whole, extant work provides decidedly mixed evidence of party-political differences outside domestic politics. This article first conducts a systematic empirical analysis of the relationship between parties’ left-right positions and their general attitude towards peace and security missions, which suggests that right-leaning parties tend to be more supportive of military operations. Yet, the results also show that the empirical pattern is curvilinear: centrist and center-right parties witness the highest level of support for military missions, while parties on both ends of the political spectrum show substantially less support. The second part of our analysis examines whether the stronger support of rightist parties for peace and security missions translates into a greater inclination of right-wing governments to actually deploy forces to military operations. Strikingly, our results suggest that leftist governments were actually more inclined to participate in operations than their right-leaning counterparts. The greater willingness of left-wing executives to deploy military forces is the result of their greater inclination to participate in operations with inclusive goals. 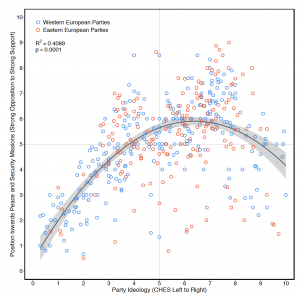 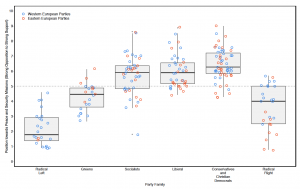