The influence of parliaments on the formulation of security policy has found increasing interest in recent research. Importantly, comparative studies showed that consolidated democracies are characterized by substantial variance in the formal-institutional oversight powers of parliaments. While countries like the UK and France grant extensive powers to the executive, other countries, like Germany, Denmark, and Sweden, place military deployments under mandatory parliamentary approval. At the same time, however, research also shows that foreign policy outcomes cannot be attributed to the formal-institutional position of parliament alone. Instead, in order to explain specific policy decisions, additional factors such as party politics and ideology, parliamentary majorities, and public opinion need to be taken into account.

Moreover, whether parliamentary control actually has the intended consequences is contested, not least from the perspective of democratic theory. In practice, even in countries which require parliamentary approval parliament rarely vetoes government decisions. Consensual cross-party decisions, however, make it difficult for voters to attribute decisions to specific political actors. This undermines the “election mechanism” prominent in democratic theory and arguments on the democratic peace. Another strand in the literature focuses on the effects of parliamentary oversight on the conduct of multilateral military operations. These studies show an increased incidence of national caveats through parliamentary oversight, i.e. there tend to be more operational restrictions, which can lead to substantial problems for the effectiveness of multilateral operations.

Parallel to the academic debate, several western democracies witnessed an evaluation and reassessment of the relationship between the executive and parliament in terms of security policy. For instance, in Germany the current Bundestag introduced a commission to reassess parliamentary oversight procedures. In its policy recommendations, the commission suggested several options for reform, some of which would reduce existing oversight powers. In contrast, in Britain a cross-party consensus emerged in support of involving parliament in decisions on war, after the Iraq War was regarded as a failure by wide parts of the political elite and the public at large. Likewise, Spain introduced a parliamentary deployment law as a consequence of the decision to participate in Iraq. Finally, the United States saw several attempts at reforming the War Powers Resolution, which has remained contested among political actors since its introduction in 1973. During the present Congress alone, several reform initiatives were submitted but none of these passed into law.

An authors’ workshop took place on 22-23 September 2016 at the Peace Research Institute Frankfurt (Hessische Stiftung Friedens- und Konfliktforschung). We gratefully acknowledge project funding of 11,000 EUR from the German Foundation for Peace Research (Deutsche Stiftung Friedensforschung) and financial and logistial support from the Peace Research Institute Frankfurt and the Bavarian School of Public Policy at the Technical University of Munich. The workshop was organized under the auspices of and in cooperation with the DVPW-Themengruppe Außen- und Sicherheitspolitik. [More Information]

The project results were published in special issues of the British Journal of Politics and International Relations (guest edited by Patrick A. Mello and Dirk Peters) and Sicherheit und Frieden (edited by Heiner Hänggi): 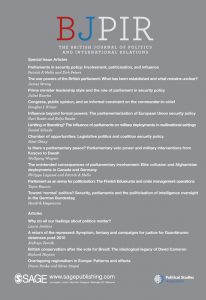 Lagassé, Philippe and Patrick A. Mello (2018) The Unintended Consequences of Parliamentary Involvement: Elite Collusion and the Afghanistan Deployments of Canada and Germany, British Journal of Politics and International Relations 20: 1, 135-157. [Open Access] 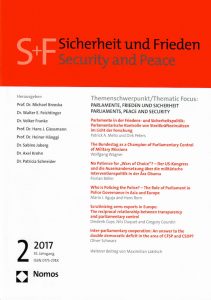 Manage Cookie Consent
To provide the best experiences, this website uses cookies to store and/or access device information. Consenting to these will allow the processing of data such as browsing behavior or unique IDs on this site. Not consenting or withdrawing consent, may adversely affect certain features and functions.
Manage options Manage services Manage vendors Read more about these purposes
View preferences
{title} {title} {title}