Incentives and Constraints: A Configurational Account of European Involvement in the anti-Daesh Coalition

The European Political Science Review (Cambridge University Press) has accepted my article “Incentives and Constraints: A Configurational Account of European Involvement in the anti-Daesh Coalition”. The accepted version (after peer review, pre-copyediting) of the article can be accessed here.

Abstract: In 2014, the United States initiated the formation of a multilateral military operation against Daesh in Syria and Iraq. Eventually, more than 70 states joined the anti-Daesh coalition. However, contributions to the military effort have been characterized by great variance, especially among EU member states. While some states took leading roles in the airstrikes, others provided training for Iraqi and Kurdish forces, and still others did not get involved beyond voicing their support for the policy. Against this backdrop, this article makes a twofold contribution to the literature on military coalitions and security policy. Empirically, the article provides a mapping of the then 28 EU member states’ military engagement in the fight against Daesh in Syria and Iraq. Analytically, fuzzy-set Qualitative Comparative Analysis (fsQCA) is applied to account for the observed pattern of military involvement, using an integrative framework that combines international and domestic factors. The results demonstrate that multiple paths led towards EU military involvement in the anti-Daesh coalition. At the same time, international-level incentives, such as external threat and/or alliance value feature prominently in all three identified paths. The analysis further underscores the value of a configurational perspective, because neither an external threat nor alliance value are sufficient on their own to bring about the outcome. Across the set-theoretic configurations, these conditions either combine with other “push” factors or with the absence of constraints against military involvement. In line with the latter, the article highlights the policy relevance of institutional constraints, especially legislative veto rights, since most of those countries that were involved in the airstrikes of the anti-Daesh coalition did not have formal parliamentary involvement on matters of military deployment policy.

Georgetown University Press has just published my QCA textbook Qualitative Comparative Analysis: An Introduction to Research Design and Application. Following an ideal-typical research cycle, the book’s ten chapters cover the methodological basis and analytical routine of QCA, as well as matters of research design, causation and causal complexity, and QCA variants. A comprehensive glossary helps to clarify frequently used terms. The book is complemented by an accessible online R manual to help new users practice QCA’s analytical steps on sample data and then implement those steps with their own findings. The book further contains boxes by other authors from across the social sciences, who are reflecting on their own QCA applications and their use of specific variants of the method. For more information, reviews, and online material, please click the button below.

Palgrave just published the edited volume Foreign Policy Change in Europe Since 1991, co-edited by Jeroen Joly (Saint-Louis University Brussels) and Tim Haesebrouck (Ghent University). The book analyzes foreign policy change and continuity across 11 European countries throughout the past three decades. I contributed a chapter on German Foreign Policy to the volume.

Many thanks to the editors for inviting me to contribute to this project!

From August 23-27, 2021 I taught at the 25th Summer School in Social Science Methods, organized by the Swiss Foundation for Social Science (FORS) and the Università della Svizzera Italiana (USI). The summer school is hosted at USI in beautiful Lugano, Switzerland.

This was the third time that I offered a one-week intensive course on Qualitative Comparative Analysis (QCA) at the Swiss Summer School in Lugano (after 2016 and 2019, respectively). The course was offered in hybrid format, with in-presence and online participants attending the course.

The course was based on my QCA textbook Qualitative Comparative Analysis: An Introduction to Research Design and Application, published with Georgetown University Press (2021, Publisher’s Website).

Many thanks to all course participants for an intensive and fun week with QCA! And thanks to School Coordinator Janice Casarella and the School Directors Eugène Horber, Patrick Gagliardini, and Benedetto Lepori for the excellent and smooth organization!

The Routledge volume Researching Non-State Actors in International Security: Theory and Practice, edited by Andreas Kruck and Andrea Schneiker, has now been turned into a fully open access book. The book contains chapters on “interpreting texts” (Part I), “establishing causal claims” (Part II), and “doing fieldwork” (Part III). I contributed a chapter on “Qualitative Comparative Analysis and the Study of Non-State Actors” to Part II of the volume. The book’s substantive chapters are complemented by “discussion chapters” where commentators draw together and reflect upon the respective areas of research.

Many thanks to the editors and other contributors for their efforts turning this into an open access book! I am grateful for the open access funding approved by the University of Erfurt to contribute to this aim.

On April 29-30, I taught a virtual workshop for 13 faculty members of the Perelman School of Medicine at the University of Pennsylvania, who are working on health-related applications of Qualitative Comparative Analysis. The intensive course followed the structure of my QCA textbook, which will be published with Georgetown University Press later this year (information about the book can be found here).

Dating its foundation to 1740 with Benjamin Franklin as its first president, the University of Pennsylvania is a private Ivy League research university in Philadelphia, Pennsylvania. The Perelman School of Medicine is frequently ranked among the leading medical schools in the world.

Thanks to everyone involved for turning this into a highly constructive two-day workshop experience! 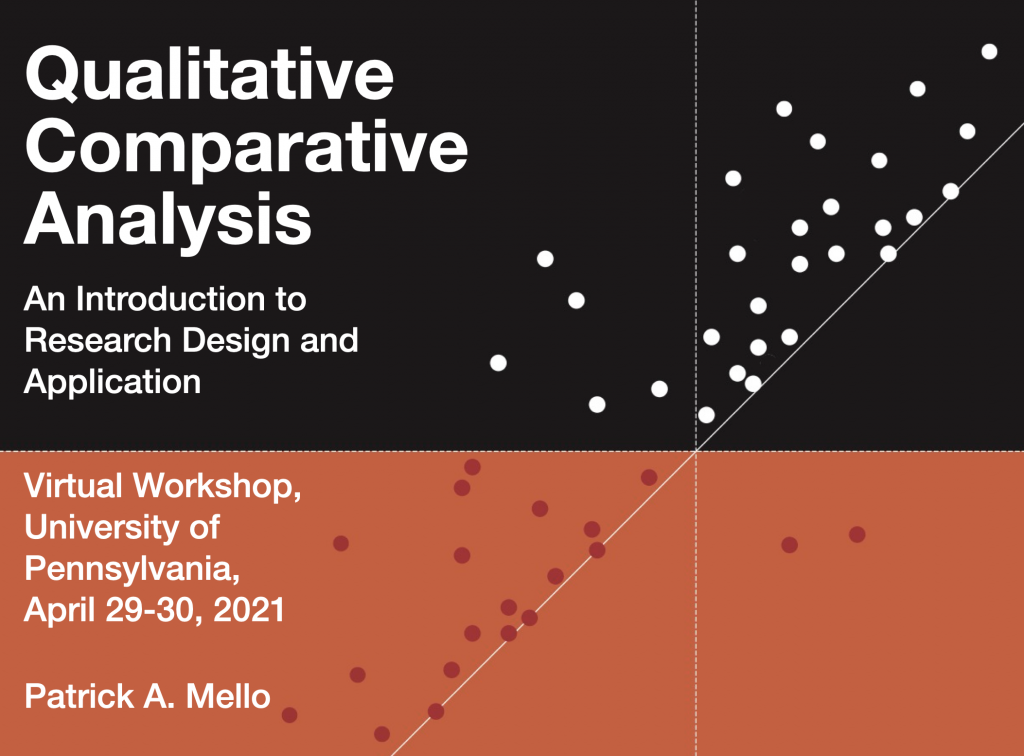